I know what you are thinking. What the heck kind of post is this. The title is super deep. And yes the subject matter is super deep. Last year I began to write all about the day I lost my son and then something stopped me. I was a brand new blogger, I was scared of all the judgement, the comments, the un-follows etc. But I always felt deep in my heart that this was a story that I had to share. I’ve always thought that if I could share my stories on my blog and if they helped just one person in some way then they are worth any negative repercussions that come my way. Because of all of your support from my Living With Anxiety post,I feel empowered to tell this story.

So now that I am over my insecurities, I am ready to tell you the story of the day I lost my son. When I say lost, I mean LOST, as in I could not find my 9 year old son and he could not find me for over an hour in a really super crowded, scary and enormous place.

Do you recall the post I did on our trip to San Antonio last year, the one titled: San Antonio Waterparks, Riverwalk, Tarheels and Tantrums ? It was a  generally fun and uneventful trip. It was well planned, including our trip to Sea World’s new water park Atlantis. As always we had looked at the map of the water park, pre-purchased tickets and learned all about the rides so we were all set to go the next day. That is until we got online to look up the opening hours only to discover they were closed for the rest of our trip. UNBELIEVABLE!

We promised the kids a water park and we wanted to deliver. My husband quickly found another waterpark close to San Antonio called Schlitterbahn in New Braunsfel, Texas. It is actually one of the top water parks in the world. We were all excited to have found alternative plans however it was late and we hadn’t had time to do our due diligence and research all the rides and the maps as we usually do.

Schlitterbahn waterpark was absolutely amazing. Probably the best water park I’ve ever been to. It’s actually two parks in one. An older section and a newer section.We rented a locker to store our cellphone and towels in at the old side of the park and began our day of “fun”.  After driving all the way out there and spending about an hour and a half in the old section of the park Jude was done. I mean absolutely un-interested in everything there. My husband decided to take him all the way back to the hotel and come back to get Gavin and I around 5:30 PM.

Around 3:30pm Gavin and I ate lunch and then got on the bus to get to the new side of the park. As soon as we got off the bus which is about a mile or two from the old side of the park we spotted “The Falls”. We thought this was an average, run of the mill, lazy river, boy were we wrong….Take a look

I had no idea you that it is the longest water ride in the world? Now take a look at this little beauty below the Aquaveyor? Yes, well this is where it all happened. The entire ride Gavin and I struggled to hold on to each other and not get separated . Several times we did and he would be several feet ahead of me. But this is when it turned bad. Gavin got sucked down a rapid to the left of this thing and I got sucked up the Aquaveyor. Yep, that’s right. At this point I was thinking ok, no big deal, I’ll get over the hill and he will be right there waiting. NOPE, No WHERE in Sight. ANYWHERE. 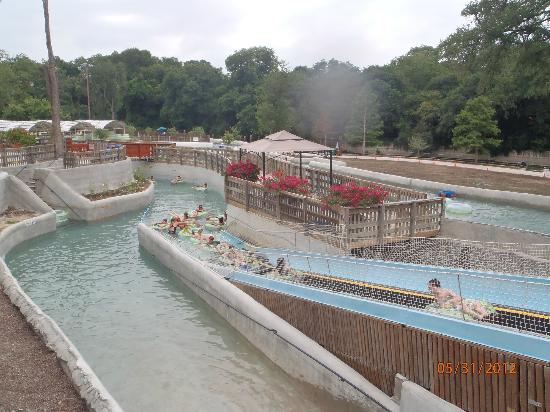 This photo of Schlitterbahn New Braunfels Waterpark is courtesy of TripAdvisor

Another issue with “The Falls” is that after this point in the ride there are constant exit points. When I saw that I started really getting worried. I assumed you got off where you got on. I thought that we would find each other at the end and everything would be fine but when I saw 1, 2, 3, 4, 5,6 exit points my mind started racing and I started paddling. People were laughing at me. Pointing at me and making fun of me for trying to paddle out of the ride. I didn’t get off at an exit point because I was afraid he was still on the ride.

Finally, after about 15 minutes on the ride I got to the end and thought I would see him standing at the entrance/exit waiting for me. He wasn’t there. Did I pass him? Did the ride have two different paths? Did he get off at another exit point and he’s sitting somewhere there? So I waited a few minutes at the exit and then I immediately found two employees. I told them exactly what he was wearing and what happened. They didn’t seem too worried they acted like this happens all the time. But here were my worries….

At the entrance of the ride is exactly where bus loads of people are dropped off and picked up to be transported between the old and new side of the park (remember our locker was on the old side). And when I say side, I mean you are driven through a town from one park to another. Did he get on the bus thinking I went back to look for him?

The ride we were on was right there next to a huge parking lot, an easy exit for a kidnapper to swoop him up and take him.

Lastly the park was huge and he could be anywhere including on the ride still…you have the option of staying on continuously. Like as in…as long as you want. Was he still on there?

I reported to them exactly what he looked like and told them I was going to walk up the side of the ride and check all the exit points. At this point I knew I wasn’t going to find him by myself. That is not a good feeling but deep in my heart I was not freaking out.

I went back to the employees and asked the hardest question I’ve ever had to ask, “Where do you report lost children?’  They directed me to the locker rooms at this side of the park. I then had to fill out a piece of paper which was really weird, kind of like if I lost my wallet of purse. I was thinking this is my kid send out the police squad, stop the rides, the buses, close the gates. Everyone else didn’t seem to think the same way as I did.

Now although I had a sense of urgency because all I wanted was to be back with my son, I still had that feeling of peace that he was ok. Within seconds of filling out the paper of his description a police officer that works at the park walked up to me and said are you missing you child and I confirmed that I was. He said “We have him.”  You’ll have to ride with me because he’s at the top of the park.

I asked him if he was ok and he said he was fine but a little upset. He has been at the lifeguard stand for about an hour. I asked him how he got there and this is when I finally broke down. The officer said that when he got off  “The Falls” he waited for a few minutes and when he couldn’t find me he found a lifeguard stand and told them he was separated from him Mom. They immediately took him to a safe place and kept him there. As soon as he told me this, tears just started pouring. I told the police officer, “You know you try to teach and prepare your kids for moments like these, not thinking they will ever happen, and when they do you never know if your child will actually do what they have been taught, and he did!”

After about a 2 minute ride to the top of the park (and yes we were still on the same side) we got to the locker room. As soon as I saw him he started crying, he was very upset, of course. I told him how proud I was of him and he did everything right!

He asked if we could ride just one more ride. I said yes but as long as it’s one where we are sitting on the same raft. We then got back on the bus and raced back to our locker, got our stuff and met Jude and my husband at the front gate. That is a day Gavin and I will never forget.

How I Prepared for the Day I Lost MY Child

Some may disagree with me but I have always felt that appropriate information given at the right age is extremely important to keep children safe. I have never just put everything out there at once but I slowly educate my children as they are able to handle the information. My goal is not to scare them or make them overly anxious but instead prepared.

Please remember losing your child can happen to anyone at anytime. Keep calm and level headed but act fast. About 6 months after  my incident with Gavin we were at an extremely busy park and a woman  and her older son were yelling for her young child  and searching for him in a panic. To my surprise no one was helping her or asking her if she needed help. I gave my two kids to my husband and approached her. I immediately asked her details of what he was wearing, what his name was, what he looked like and started searching with her. Luckily we found him pretty quickly. But this is what I am talking about, be proactive and act fast. If someone needs help looking for a lost child, act immediately, don’t let that child become a statistic. Remember everything you teach your child is preparing them for what life throws at them and you never know what that may be….or when that may happen. Although I hate this happened to Gavin I know he’s stronger and a more confident young man. He’s growing wiser everyday  and one day he will brave this big world without me, with great confidence and strength.

Please feel free to share any of your experiences in the comments below.

Sign Up for Our Newsletter and We'll Send
You Access to The Printable Library!
« MOS Magnetic Organization System Review
Diaper Box Storage Bins »